YouTube Shooting Witness: "I Didn't Have a Gun on Me, But Wish I Did" #YouTubeShooting

A man who witnessed the shooting at YouTube's San Bruno headquarters on Tuesday said he wished he had been carrying a gun when the shooting occurred.

"I didn't have a gun on me, but wish I did," said the man, who was ordering food across from the company's headquarters when the shooting began.

Police confirmed that the female shooter, who has not been named, was not a YouTube employee and didn't know anyone at the company.  Witnesses say the shooting broke out at an employee party, which is thought to be how the woman may have gained access to the building.

It didn't take long before the YouTube shooting turned political. After journalist Jack Posobiec tweeted an official report from a local Bay Area news outlet listing the shooter as a "white, adult female wearing a dark top and head scarf," blue-checked Twitter users performed quick mental gymnastics to arrive at the conclusion that conservatives are "spreading vile conspiracies that ANTIFA is behind the YouTube HQ shooting."

Jack Posobiec is already spreading vile conspiracies that ANTIFA is behind the YouTube HQ shooting. Dangerous and sick. @jackposobiec @FBI

Apparently ABC7 was in on it too...

Others made tasteless jokes:

Wait, did I miss InfoWars getting kicked off YouTube? Is this what it's about?

Fake history teacher jokes about active shooting in which people have been killed to blame Infowars.

Gamergate figure Briana Wu decided to use the shooting to promote her congressional campaign. 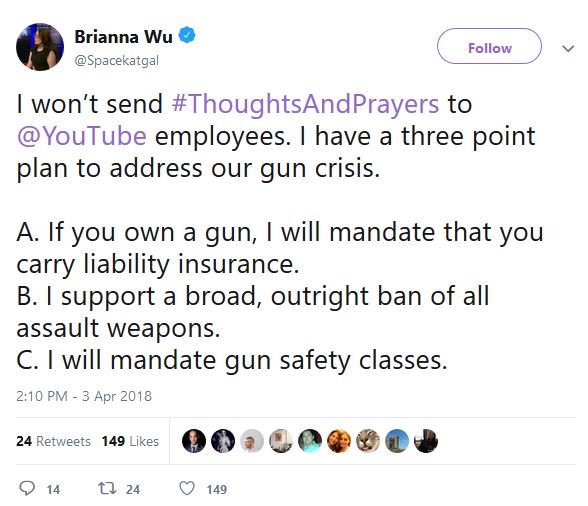 Brianna Wu is using the YouTube mass shooting to promote her Congressional campaign.

And some simply wished that Trump voters were all dead, ideally murdered by drowning in molten gun metal.

Proud traitor. Take their guns. Melt them down. Drown them in the molten metal. https://t.co/gSzze294DF

By the way, if I get suspended or banned or whatever for saying I want MAGAs and NRA members immolated in a vat of melted down guns, do not weep for me. I will be happy with that legacy.

Jenny "Was it something I said?" Trout✔@Jenny_Trout

Before you enter my mentions to contribute to the single largest pubic hair fire in American history, let me suggest that you not, for the following reasons:

Jenny "Was it something I said?" Trout✔@Jenny_Trout

Naturally, it didn't take long before the NRA got the blame - including from "blue checked" Democrats such as New York State Assemblyman Jeffrey Dinowitz.

In light of the shooting in San Bruno at YouTube, will the @NRA apologize for this disgusting tweet in which it calls on its members to “rise up” against the company’s decision to take down how-to gun videos? https://twitter.com/NRATV/status/978722468616548353 …

The formerly famous Alyssa Milano got in on the action;

If @NRA or @NRATv were run by brown or black people, it would be labeled a terrorist organization with hate propaganda programming that incites violence. https://twitter.com/nratv/status/978722468616548353 …

A woman shot her boyfriend, but the rational response is to immediately label the NRA and their 5 million+ membership a "terrorist organization". OK. https://twitter.com/michaelianblack/status/981268351744905217 …

And as we previously reported, prominent California politicians wasted no time turning this into a gun control issue before the shooter's body was even cold.

My staff & I are closely following developments from the active shooter situation at YouTube HQ in San Bruno, CA. Thank you to our heroic first responders. Our Bay Area community – and all American communities – deserve real action to #EndGunViolence.

And somehow it's Russia's propaganda that is the source of daily outrage.