DONALD Trump and Vladimir Putin took the world to the brink of World War 3 today as the US President warned Russia "missiles are coming" and the Kremlin responded by vowing to blow up US ships.

An astonishingly volatile tweet from Trump about proposed US intervention in Syria said: "Get ready Russia, because they [missiles] will be coming, nice and new and “smart!”.

The tweet further incensed Russia who had already warned US missiles would be shot down and “launch sites” – believed to be the two American warships on patrol in the Mediterranean – would be blown up.

A morning of increasingly hostile announcements on both sides created an atmosphere of deadly Cold War stand-off not seen since the 1962 Cuban Missile Crisis.

Even a Trump tweet conceded: "Our relationship with Russia is worse now than it has ever been, and that includes the Cold War.”

Russia had issued a warning last night saying that any US missiles fired at Syria over the assault on a rebel enclave would be shot down and the launch sites targeted.

And the Syrian government weighed in saying the reports of an alleged chemical attack on civilians in the Syrian town of Douma are false.

President Trump's full tweet earlier today said: "Russia vows to shoot down any and all missiles fired at Syria.

"Get ready Russia, because they will be coming, nice and new and “smart!”

Adding: "Our relationship with Russia is worse now than it has ever been, and that includes the Cold War.

"There is no reason for this. Russia needs us to help with their economy, something that would be very easy to do, and we need all nations to work together. Stop the arms race?" 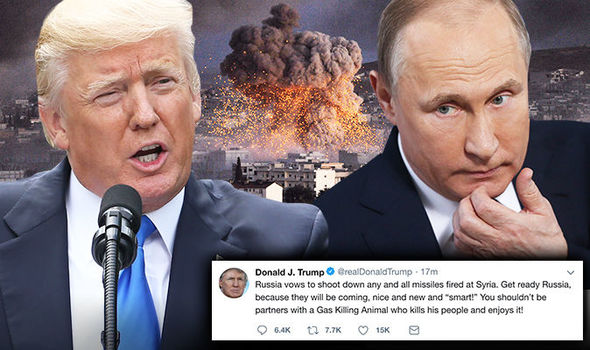 Russia vs USA: War of words between Trump and Putin 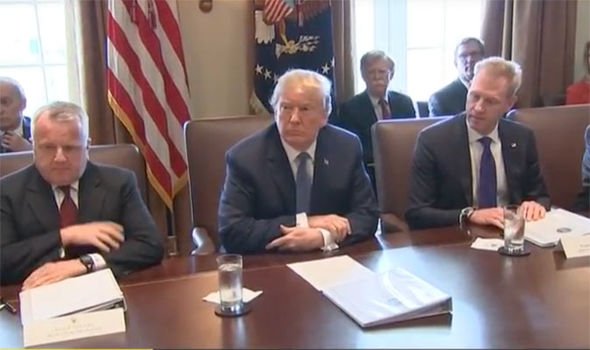 Maria Zakharova, spokeswoman for the Russian Foreign Ministry responded to the US leader, writing on Facebook: "Smart missiles should fly towards terrorists, and not towards the lawful government which has been fighting international terrorism on its territory for several years."

She said a possible US missile strike could be an attempt to destroy evidence of the alleged chemical attack in Douma.

Mr Trump then tweeted: "Much of the bad blood with Russia is caused by the Fake & Corrupt Russia Investigation, headed up by the all Democrat loyalists, or people that worked for Obama. Mueller is most conflicted of all (except Rosenstein who signed FISA & Comey letter). No Collusion, so they go crazy!"

The US President's shock comments come after Alexander Zasypkin, Russia's ambassador to Lebanon, told Hezbollah's al-Manar TV: "If there is a strike by the Americans then... the missiles will be downed and even the sources from which the missiles were fired."

President Trump has not taken any heed of Moscow and appears to be close to taking action in Syria after Saturday's deadly chemical attack.

He vowed "animal Assad" would pay a "heavy price". 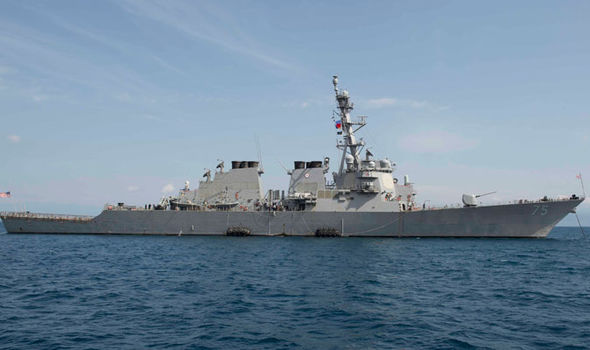 "You shouldn’t be partners with a Gas Killing Animal who kills his people and enjoys it!"

Kremlin spokesman Dmitry Peskov said earlier today: "As before, we would like to hope that all sides will avoid any steps that a) are not provoked by anything and b) could significantly destabilise an already fragile situation in the region."

Russia and Iran are the main backers of Syrian dictator Bashar al-Assad whose ruthless seven-year war against his own people is supported by Russian warplanes.

Russia and the US blocked attempts by each other in the UN Security Council on Tuesday to set up international investigations into chemical weapons attacks in Syria.

And now the US and its allies, including the UK, are considering whether to hit Syria over a suspected poison gas attack that medical relief organisations say killed dozens of people in the rebel-held town of Douma near Damascus on Saturday.

She said: "The Security Council has been unable to act, solely because Russia has abused the power of veto." 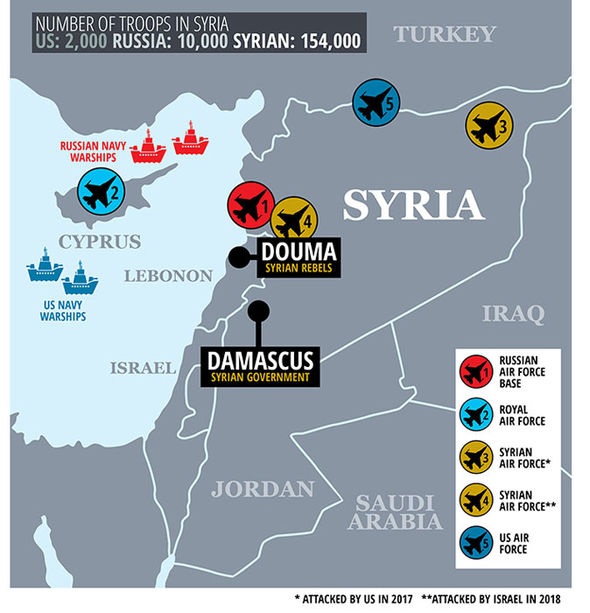 Russia vs USA: Number of troops in Syria 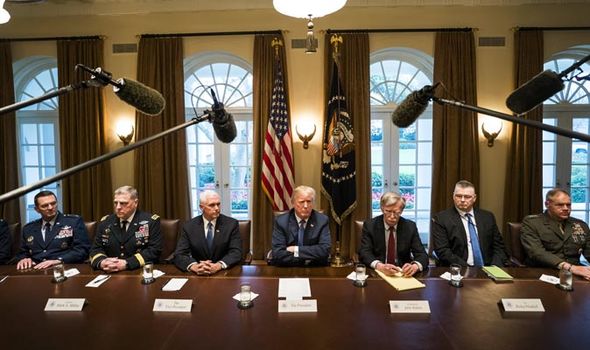 Donald Trump tweeted on his plan for Russia

Both Russia and Iran, Assad's other main ally, have warned his enemies against military action in recent days, underlining their commitment to the Syrian government they have armed and supported through years of conflict.

Ali Akbar Velayati, the top adviser to Iranian Supreme Leader Ayatollah Ali Khamenei, said during a visit to Damascus on Tuesday that an Israeli attack on an air base in Syria earlier this week would "not remain without response".

The Russian military said on March 13 that it would respond to any U.S. strike on Syria by targeting any missiles and launchers involved. Russia is Assad's most powerful ally and its devastating air power has helped him wrest back large areas of territory from rebels since 2015.

Zasypkin also said a clash between Russia and the United States over Syria "should be ruled out and therefore we are ready to hold negotiations".

Earlier in the week, Russian Deputy Foreign Minister Mikhail Bogdanov said there was no threat of the situation in Syria spiralling into U.S.-Russian hostilities. TASS news agency quoted him as saying he believed common sense would prev 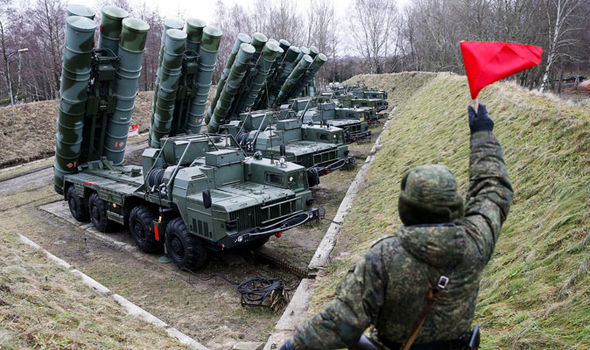