Taxes: When the Congressional Budget Office released its updated budget forecast, everyone focused on the deficit number. But buried in the report was the CBO's tacit admission that it vastly overestimated the cost of the Trump tax cuts, because it didn't account for the strong economic growth they would generate.

Among the many details in the report, the one reporters focused on was the CBO's forecast that the federal deficit would top $1 trillion in 2020, two years earlier than the CBO had previously said.

And, naturally, most news accounts blamed the tax cuts. "U.S. budget deficit to balloon on Republican tax cuts" is how Reuters put it in a headline.

But there's more to the story that the media overlooked.

First, the CBO revised its economic forecast sharply upward this year and next.

"Underlying economic conditions have improved in some unexpected ways since June," the CBO says. Unexpected to the CBO, perhaps, but not to those of us who understood that Trump's tax cuts and deregulatory efforts would boosts growth.

In any case, the CBO now expects GDP to be $6.1 trillion bigger by 2027 than it did before the tax cuts.

The CBO report also makes clear that this faster-growing economy will offset most of the costs of the Trump tax cuts.

In a table buried in the appendix of the CBO report, it shows that, before accounting for economic growth, the tax cuts Trump signed into law late last year would cut federal revenues by $1.69 trillion from 2018-2027.

But it goes on to say that higher rate of GDP growth will produce $1.1 trillion in new revenues. In other words, 65% of the tax cuts are paid for by extra economic growth. 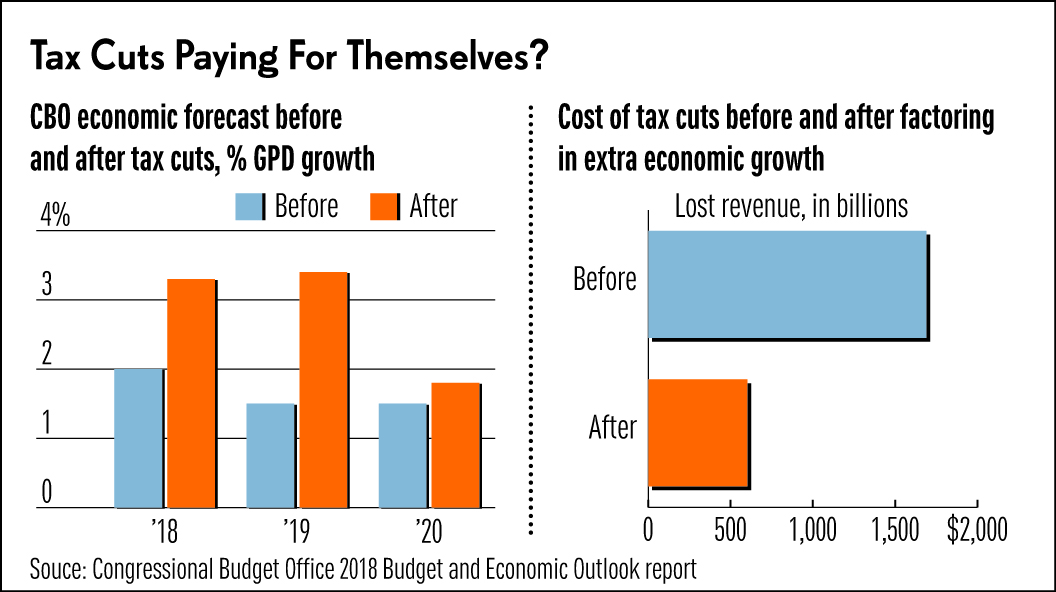 That faster growth will also reduce federal entitlement spending keyed to the economy — unemployment insurance, food stamps, welfare and the like — by $150 billion, the CBO says.

If you subtract that from the cost of the tax cuts, the net cost drops to $440 billion.

This is what we and other backers of the tax cuts had insisted all along. Not that tax cuts would entirely pay for themselves. But that the economic growth they generate would offset much of the costs.

Spending Is the Real Culprit

That still leaves the problem of the deficit. By 2022, federal deficits will top 5% of GDP, something that happened only once between World War II and President Obama's spending spree.

Despite what Democrats and the media insist, the culprit here isn't tax cuts. It is out-of-control spending, which will be nearly $1 trillion higher over the next decade thanks to recent spending deals.

This is little short of a disgrace, and shows that Republicans love spending taxpayer money as much as Democrats.

In fact, some GOP senators don't even want Trump to use his rescission authority to strip some of the worst spending items out of the bipartisan $1.3 trillion spending monstrosity.

Someone needs to remind these alleged fiscal conservatives that if they can't get control of spending today, it's a virtual guarantee they'll end up agreeing to a "deficit cutting" tax hike tomorrow.