BRITISH and French forces could launch an imminent missile strike on Syria within a matter of hours, aviation monitors have revealed.

May sends strong warning to Putin over Syria chemical attack

A coalition force could fire “air-to-ground or cruise missiles” in the wake of a horrifying chemical attack on innocent civilians in Syria last week.

Aviation experts AirLive have reported this evening a “rapid alert notification” warning aircraft in the eastern Mediterranean to be wary of a sudden missile strike.

AirLive said the alert was issued by Eurocontrol this evening for a “possible launch … within the next 72 hours”.

AirLive said: “According to reports, British forces are mobilising at their bases in Cyprus and Rafale fighter jets could takeoff from St Dizier airbase in France for possible strikes against Syria.”

Syria chemical attack: Missiles could be fired at Syria within a matter of hours

The Eurocontrol alert said: “Due to the possible launch of air strikes into Syria with air-to-ground and/or cruise missiles within the next 72 hours, and the possibility of intermittent disruption of radio navigation equipment, due consideration needs to be taken when planning flight operations in the Eastern Mediterranean / Nicosia FIR area.”

The UK has said military intervention is a possibility following the chemical attack in Douma.

Syrian opposition activists and rescuers said poison gas was used on the rebel-held town near the capital, an allegation strongly denied by the Assad government.

Families were reportedly found suffocated in their homes and shelters, foaming at the mouth.

Rebel fighters shot down the Russian warplane and captured the pilot, who was later killed after he fought the rebels

Reports suggested more than 500 people, mostly women and children, were taken to medical centres with difficulty breathing, foaming at the mouth and burning sensations in the eyes.

The attack comes almost exactly a year after a chemical atrocity in the northern Syrian town of Khan Sheikhoun killed dozens of people.

Earlier today Prime Minister Theresa May and U.S. President Donald Trump have said the world must act to ensure those behind a suspected chemical attack in Syria are held to account, as Washington considers a multinational military response.

Mrs May spoke with Mr Trump by telephone on Tuesday afternoon, agreeing that the reported attack was "utterly reprehensible" and that the international community must respond to uphold the worldwide prohibition on chemical weapon use. 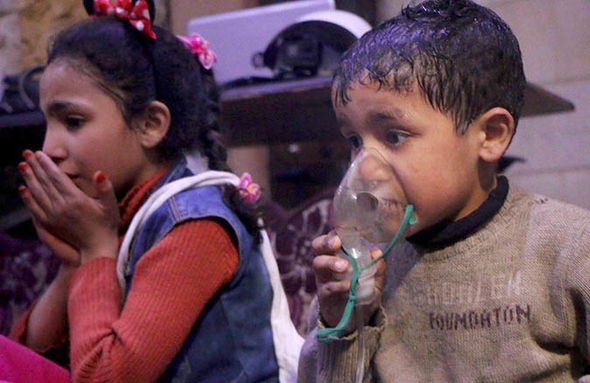 "They agreed they would continue working closely together and with international partners to ensure that those responsible were held to account," a statement from Downing Street office said.

Mrs May had earlier agreed the same thing in a call with French President Emmanuel Macron.

A White House statement said Trump and May "agreed not to allow the use of chemical weapons to continue".