April 25 2018 marks the 65th anniversary of the launch of Project MKULTRA - the US Central Intelligence Agency's mind control experiment program. It would not be the first time, nor the last, that the US government engaged in unethical human experimentation.

While MKULTRA began in April 1953 on the orders of then-CIA Director Allen Welsh Dulles, its origins lie in 1945, and Operation Paperclip — the secret transfer of top Nazi scientists to the US. Armed with extensive documentation on unethical Nazi human experimentation, including research into mind control, a clutch of military programs related to mental manipulation and behavioral modification were launched — including CHATTER, BLUEBIRD and ARTICHOKE.

MKULTRA was justified to Washington leaders on the (erroneous) basis Chinese, North Korean and Soviet forces had subjected Allied prisoners of war in the Korean War to mind control — the US was presented as being on the wrong side of a research gap, a situation the CIA was only too keen to reverse.

In reality, the CIA sought to produce a truth drug for use in interrogations, and explore possible uses for mind controlled subjects — such as the control of foreign leaders, and assassination.

So it was that for the next 20 years, the CIA and the Special Operations Division of the US Army Chemical Corps engaged in a concerted campaign of criminality.

Along the way, the mental states and brain functions of unwitting and unwilling test subjects were tortured with abandon. Powerful psychedelic drugs such as LSD were administered, and individuals endured hypnosis, sensory deprivation, isolation, verbal and sexual abuse — and somehow, much, much more.

Handout shows the brains of subjects lying awake with their eyes closed, under a placebo and the drug LSD, when being examined using functional MRI.

A 1955 document outlines what drugs would be used, and their intended effects. The substances would, it was hoped, "promote illogical thinking and impulsiveness to the point the recipient would be discredited in public"; cause victims to age faster; recreate the effects of alcohol; emulate the symptoms of recognized diseases; induce brain damage and loss of memory; produce amnesia of particular events; provoke shock and confusion over extended periods of time; create physical disablement (such as paralysis); alter personality structure…."

All drugs were typically administered without informed consent — a violation of the Nuremberg Code. Common victims included  mental patients, prisoners, drug addicts and prostitutes ("people who could not fight back" one CIA officer said). In one case, the hallucinogenic drug was administered to a mental patient in Kentucky 174 days in a row.

However, LSD was also administered to CIA employees, military personnel, doctors and other government agents. Spiking CIA agents grew so widespread as to become an "occupational hazard" for staff.

Several deaths may have resulted from this policy. For instance, army scientist Dr. Frank Olson — who'd collapsed into deep depression after a surreptitious dosing — fell to his death from the thirteenth story window of New York City's Hotel Pennsylvania.

Ruled a suicide at the time, a 1994 autopsy concluded the circumstances of his death and state prior to the plunge were "rankly and starkly" suggestive of homicide.

LSD was eventually dumped by MKULTRA researchers due to its unpredictability. The final straw may have come when an unwittingly spiked agent had a severe panic attack and ran screaming through the streets of Washington, seeing monsters in every car he passed.

Director of the CIA Richard Helms during meetings at the White House in Washington, DC.

The operation continued on until 1973, when CIA Director Richard Helms abruptly ordered all experiments halted, and all relevant files destroyed. He was motivated by the Watergate scandal — fearing subsequent scrutiny of the US deep state's activities, he wished to ensure any subsequent investigation of clandestine CIA operations would be impossible.

Helms subsequently admitted to the existence of the program during the 1975 Church Committee investigation — although due to the bonfire of relevant documentation, the Committee could only base their investigation on the sworn testimony of participants.

Nonetheless, a 1977 a Freedom of Information Act request unearthed a cache of 20,000 documents relating to the project, which had been mistakenly filed in a financial records building. These documents were fully investigated in Senate hearings later that year.

The remaining documents largely recorded the program's catastrophic failure, but former CIA agent Miles Copeland has claimed the Senate saw only "the barest glimpse" of the scope of the project. He also speculated MKULTRA wasn't actually terminated in 1973.

The US government's interest in illegal drugs didn't end there. From 1964 —1968, the Army paid US$386,486 to professors Albert Kligman and Herbert W. Copelan to perform experiments with mind-altering drugs on 320 inmates at Holmesburg Prison, Philadelphia. The study aimed to determine the minimum effective dose of each drug needed to disable 50 percent of any given population.

Kligman and Copelan claimed they were unaware of any long-term health effects the drugs could have on prisoners — however, documents later revealed this was not the case.

The CIA’s “Torture Report” has received much heated criticism, both from human rights activists and from apologists more concerned with national security.

In the present day however, most documented research into mind control by the American state has related to torture. Under the auspices of the War on Terror, medical professionals gathered and collected data on tortured detainees in CIA prisons, in order to refine those techniques, and "provide legal cover for torture, as well as to help justify and shape future procedures and policies", according to a 2010 report by Physicians for Human Rights.

"Research and medical experimentation on detainees was used to measure the effects of large-volume waterboarding and adjust the procedure according to the results," the report said.

For instance, after a number of waterboarding experiments, doctors recommended adding saline to the water to avoid "putting detainees in a coma or killing them through overingestion of large amounts of plain water". Sleep deprivation tests were also performed on over a dozen prisoners, in 48-, 96- and 180-hour increments, and doctors collected data to judge the emotional and physical effects of various torture techniques so as to "calibrate the level of pain experienced by detainees during interrogation" and identify whether using certain types of techniques would increase a subject's "susceptibility to severe pain". 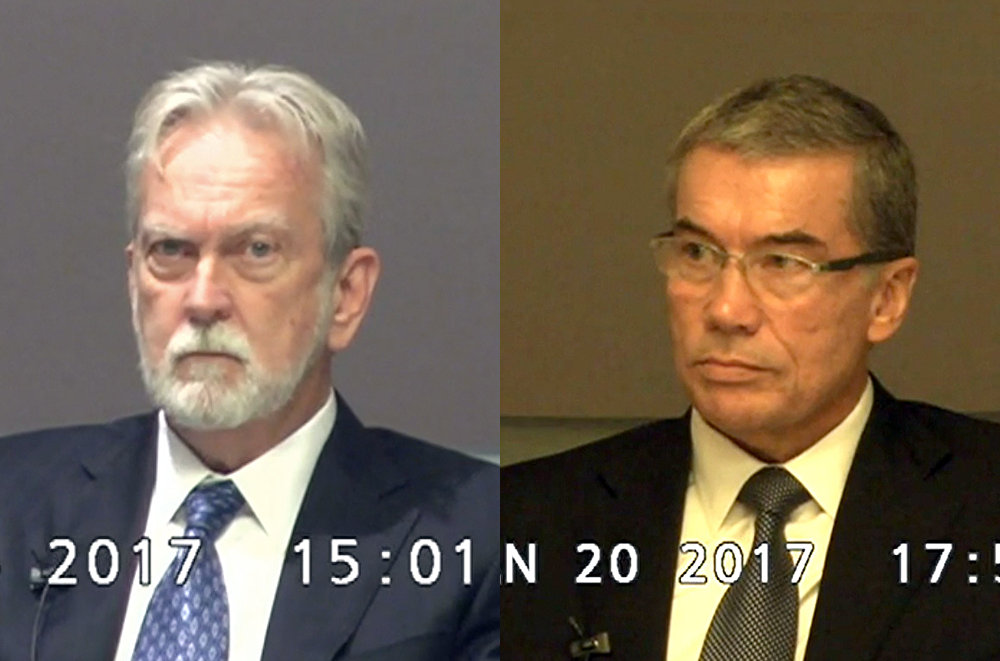 These undated still photos from trial deposition video, accepted as evidence in court and provided by the American Civil Liberties Union, shows psychologists James Mitchell, left, and John Jessen, defendants in a landmark lawsuit that the ACLU filed against the creators of the CIA's harsh interrogation program used in the war on terror.

Psychologists James Mitchell and Bruce Jessen also ran a company paid US$81 million by the CIA, that developed the "enhanced interrogation techniques" used in overseas US prisons. In August 2017, the pair settled out of court with Suleiman Abdullah Salim, Mohamed Ahmed Ben Soud, and the family of Gul Rahman, three individuals tortured and experimented on using methods developed by them. Salim and Soud still bear psychological and physical scars from their ordeal, and Rahman froze to death in a secret CIA prison in Afghanistan.