The latest reports rolling in from Syria suggest that both the Assad regime and Hezbollah have evacuated weapons from likely targets, after CNBC revealed that the U.S. has selected 8 targets to strike, including two airfields, a research center and an alleged chemical weapons facility - after US officials told a reporter they were "fairly confident" the Syrian regime had been behind a gas attack in a rebel-held suburb of Damascus.

Mr. Assad was moving to protect his air force by moving planes to a Russian-operated base equipped with sophisticated air defenses, according to pro-regime media. -WSJ

The Wall St. Journal also reports that broad plans are being crafted by the U.S., France and Britain for a military strike, while President Trump told reporters on Thursday "We’re looking very, very seriously, very closely at that whole situation, and we’ll see what happens, folks, we’ll see what happens. It’s too bad that the world puts us in a position like that." 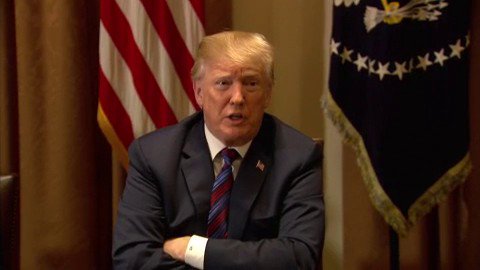 President Trump on Syria: "We're having a number of meetings today. We'll see what happens."

Adding to the tension in the region is a UK cabinet decision to back military action against the Syrian government, a day after Theresa May said she was ready to strike "without parliamentary approval."

Mattis and the Chairman of the Joint Chiefs of Staff Dunford are reportedly "concerned with managing escalation and preventing blowback on US troops," while John Bolton is known for getting very excited at the prospect of a good ol' fashioned regime change.

There remains tension between what President Trump and National Security Adviser Bolton want and what the Pentagon is advocating.

Defense Secretary Mattis and Chairman of the Joint Chiefs of Staff Dunford are concerned with managing escalation and preventing blowback on US troops.

There remains tension between what President Trump and National Security Adviser Bolton want and what the Pentagon is advocating.

“We are trying to stop the murder of innocent people, but, on a strategic level, it’s how do we keep this from escalating out of control, if you get my drift on that,” Mattis told the House Armed Services Committee on Thursday.

Mattis said that the U.S. aim in Syria is to defeat Islamic State, not “to engage in the civil war itself.” But referring to the use of chemical weapons, Mattis said that “some things are simply inexcusable, beyond the pale” and require a response. -Bloomberg

Exactly two weeks ago Mattis met Bolton - telling the bemoustached bringer-of-death "I heard you're actually the devil incarnate, and I wanted to meet you."

While the White House's reported conflict has resulted in a day without resolution, a readout of a Thursday evening call between UK Prime Minister Theresa May and President Trump signaled that the US-led coalition is perhaps "considering all their options" before waging war on Syria over a chemical attack reported by an anti-Assad NGO accused of fabricating evidence and staging bodies along with other groups in the region.

Or perhaps Trump is reconsidering in light of the incredibly low standard of evidence involved in the Syria gas attack. Wasn't Trump just railing against the FBI for using an "unverified" dossier to obtain a FISA warrant?

Number 10 readout of PM call with Trump:
Doesn’t seem to suggest an intervention in the next few hours... pic.twitter.com/XWJ4taUlop 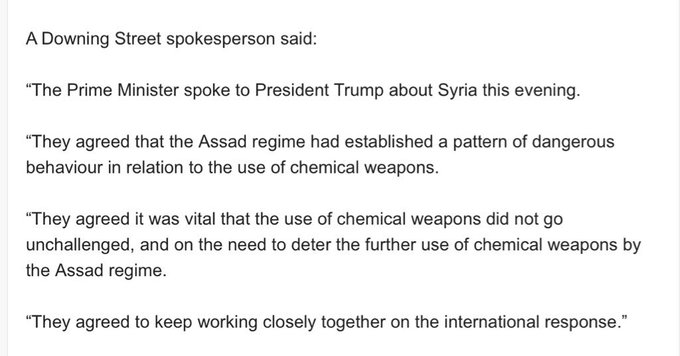 Earlier in the day, Trump tweeted that an attack on Assad's forces would come "very soon, or not so soon at all."

Never said when an attack on Syria would take place. Could be very soon or not so soon at all! In any event, the United States, under my Administration, has done a great job of ridding the region of ISIS. Where is our “Thank you America?”

Yesterday, Trump told Russia to "get ready" for a missile attack on Syria, where the Kremlin has assets and personnel at several military facilities.

Russia vows to shoot down any and all missiles fired at Syria. Get ready Russia, because they will be coming, nice and new and “smart!” You shouldn’t be partners with a Gas Killing Animal who kills his people and enjoys it!

“If these strikes start, it could end very tragically and it’s impossible to predict the outcome -- that’s the nature of military actions,” said Russian Senator Frants Klintsevich in a phone interview, adding that there are "no madmen" among Trump's top military advisors. "These are professionals who aren't populists and know what this could lead to."

Meanwhile, Russia's ambassador to the UN, Vassily Nebenzia issued a stark warning on Thursday that there was a danger the war could escalate beyond Syria because of Russia's military presence.

“We cannot exclude any possibilities [of war between Russia and the U.S.] unfortunately because we saw messages that are coming from Washington,” Mr. Nebenzia said. “They were very bellicose.”

In an attempt to settle things diplomatically, Russia asked for an open Security Council emergency meeting on Friday morning, calling for UN Secretary-General António Guterres to brief the council, according to the Wall St. Journal.

Meanwhile, the Organization for the Prohibition of Chemical Weapons (OPCW) says they are sending a team of investigators to Syria on Saturday to collect samples from the site of the alleged chemical attack last weekend.